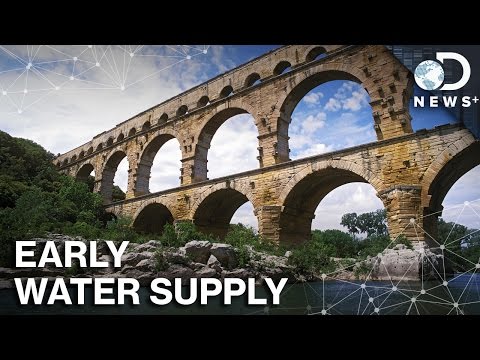 Check us out on Soundcloud! https://soundcloud.com/dnewsplus

Check out The Great Courses:

Sign up today and get a Free Month of unlimited access to all of The Great Courses Plus lectures – Go to: thegreatcoursesplus.com/dnewsplus

For many today obtaining clean drinking water can be as simple as grabbing a bottle from a refrigerator, but it wasn’t always so easy!

“Can you imagine trying to live your life without running water? Of all municipal services, a potable water supply is perhaps the most vital. All people depend on water for drinking, cooking, washing, carrying away wastes, and other domestic needs.”

“Aqueduct, ( Latin aqua + ducere, “to lead water” ) man-made conduit for carrying water. In a restricted sense, aqueducts are structures used to conduct a water stream across a hollow or valley.”

“The majestic aqueduct that fed water to ancient Rome carried less of the life-giving liquid than previously thought, new research suggests. The Anio Novus aqueduct carried water from the mountains into Rome at a rate of about 370 gallons of water per second, said lead author Bruce Fouke, a geologist and microbiologist at the University of Illinois at Urbana-Champaign.”

The history and future of drinking water, from the Roman Empire to desalination:
http://www.abc.net.au/radionational/programs/rearvision/the-history-and-future-of-drinking-water/6374830

“Most people in the big cities of the developed world take the water that comes out of their taps for granted, but population growth, drought and climate change are adding unprecedented pressure to this happy arrangement.”

DNews Plus is built for enthusiastic science fans seeking out comprehensive conversations on the geeky topics they love. Host Trace Dominguez digs beyond the usual scope to deliver details, developments and opinions on advanced topics like AI, string theory and Mars exploration. DNews Plus is also offered as an audio podcast on Soundcloud.